A CFG for balanced parentheses. Closure properties of CFLs. Introduction to pushdown automata.

1A CFG for balanced parentheses¶

First, we formally define what it means for the parentheses to be balanced. A sequence of parentheses is said to be property nested if $N_( = N_)$ (where $N_a$ is the count of the letter $a$ in the word) and, for every prefix, $N_( \geq N_)$.

Incidentally, it would not be possible to recognise a properly nested language using a finite state machine (FSM), since we know that FSMs are unable to do true counting and our definition for proper nesting clearly requires counting.

Furthermore, CFLs are not closed under complementation (this follows from the above properties).

Much like regular languages have DFAs, pushdown automata (PDAs) are the corresponding languages for CFLs. They are equivalent in terms of expressiveness to DFAs with an unbounded stack. (As an aside, note that we cannot compare the power of a DFA + queue to that of a DFA + stack; they're just not comparable. Also note that a DFA + 2 stacks is equivalent to a Turing machine.)

Here's an example of a PDA diagram: 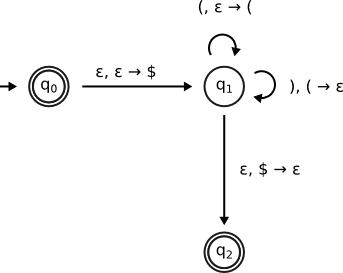 There are two different notions of acceptance when it comes to PDAs:

These notions are equivalent in expressiveness.

One possible CFG for this has the following rules:

The diagram has been omitted because the one given in class is not entirely accurate - for instance, it wouldn't accept "ab". Drawing an accurate PDA diagram for this CFL is thus left as an exercise for the reader.

3.3Relationship between determinism and ambiguity¶

Here's a grammar for this language:

This grammar happens to be ambiguous - there are two ways of generating $abc$, for instance. Indeed, there is no way to design an unambiguous grammar for this language, as this language is inherently ambiguous. Thus, any associated PDA has to be nondeterministic.

Here's the reason non-deterministic and deterministic PDAs are not equivalent in terms of their power. With finite state machines, we were able to convert an arbitrary NFA to a DFA by building a DFA that used states to keep track of the set of states each transition could bring us to in an NFA. If we tried to apply this same idea to PDAs, we come across the issue of potentially infinite sets, due to the existence of the unbounded stack. Thus we wouldn't be able to represent all of the possible sets of states that can be transitioned to in the non-deterministic version with a finite number of states.

Let's formalise the notion of a deterministic pushdown automaton (DPDA) and its relation to ambiguity. A PDA is a DPDA if:

Every CFL accepted by a DPDA has an unambiguous grammar. The converse, however, is not true. Consider $L = \{ww^{\text{rev}} \mid w \in \Sigma^*\}$. This cannot be recognised by a DPDA as you'd have to guess, in a non-deterministic manner, when the word is complete. And yet, there's a non-ambiguous grammar for it:

3.4Relationship between CFLs and PDAs¶

Theorem: a language is context-free $\iff$ it has a corresponding PDA.