THESE NOTES HAVE NOT BEEN VERIFIED BY THE INSTRUCTOR. USE AT YOUR OWN RISK.

Today, we'll start a new subject: context-free languages (CFL). All regular languages are CFLs; not all CFLs are regular (for example: $\{a^nb^n \mid n \geq 0\}$ is a CFL, as we'll see later, but is not regular, as we saw previously). Unlike in the previous subject, we will focus on the problem of generating, rather than recognising, strings, starting with a grammar. Though there are obvious parallels between the two, the problem of generation is somewhat richer and more interesting than recognition.

A context-free language is defined by the following:

Also note that the given grammar is merely an example. As we'll see later, there can be many valid grammars for generating the same language.

Consider the expression $2 \times 3 + 5$. Here's one possible derivation tree (with some steps omitted): 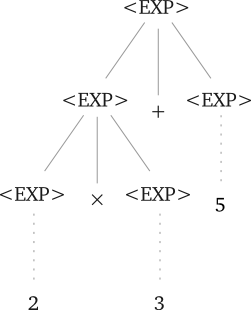 This derivation tree implicitly follows the premise that $\times$ takes precedence over $+$, since this is the mathematical convention. And yet, there is nothing in the grammar that requires this. The following derivation tree would be just as reasonable, given the grammar: 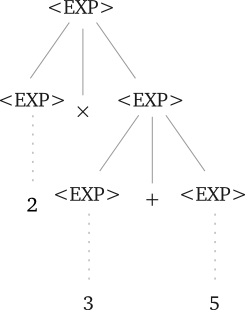 It only looks wrong due to our a priori knowledge of the precedence of $\times$ and $+$. Can we adjust the grammar to take into account what we know about operator precedence? As it turns out, we can indeed! Let's add the following non-terminals to $V$: $\text{<TERM>}$, and $\text{<FACTOR>}$. Next, let's get rid of the rules for $\text{<EXP>}$ and add the following: 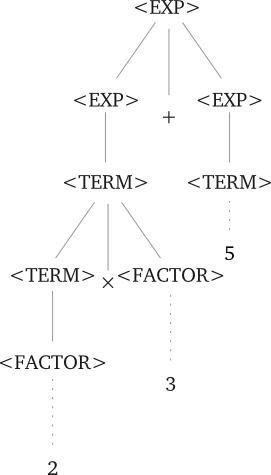 1.2Some notes on the limitations of CFLs¶

It was mentioned earlier that CFLs are more powerful than regular languages. But of course, there are languages that even CFLs can't handle.

So the hierarchy looks something like this (where $\subset$ means a strict subset):

We won't study either context-sensitive languages or phrase-structured grammars. (Incidentally, PSGs are the most powerful things in this space; they have the same power as Turing machines.)

A context-free grammar is said to be in Chomsky normal form (CNF) if every rule is in one of the following formats:

CNFs are actually quite ugly - they're not useful for compilers or anything - but they'll be useful for proving the pumping lemma later on.

1.3.1Converting a grammar to CNF¶

Sketch of the proof:

First, let's get rid of $A \to \epsilon$. For any rules for which $A$ is on the RHS, replace that rule with $2^n-1$ (with $n$ being the number of $A$'s in the original rule) rules, which are identical except with the $A$'s removed, in every possible combination. For example: $B \to abAbcA$ would become $B \to abAbc \mid abbcA \mid abbc$.

Note: if you ever need to generate something in CNF for an assignment or exam, do not use this algorithm. It is a waste of your time (and the grader's time) and there are better ways of doing it. This algorithm is presented solely for proof purposes.