If we wanted to build a Turing machine for recognising this language, we could use the following algorithm: if there is only one $a$, we accept immediately. Otherwise, sweep across the tape, starting from the left, crossing off every second $a$. We can use part of our state to remember the parity of the number of $a$'s - if there is an odd number that have been marked by the time we get to $\sqcup$ (the end of word character), we reject.

This description isn't very good, but the machine looks something like this: 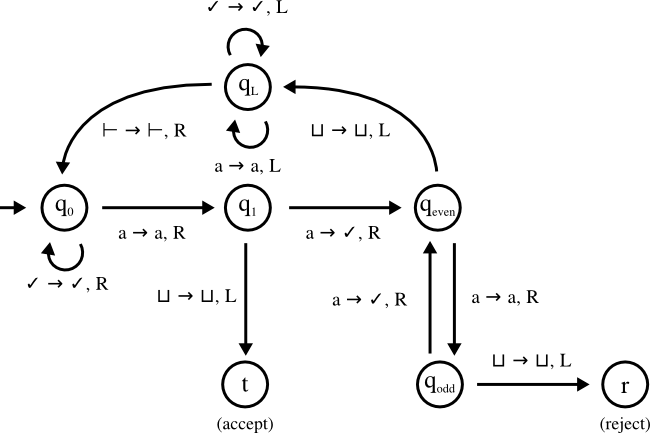 (This was the diagram given in class. Apparently some other states need a looping transition of the form $\checkmark \to \checkmark, R$ like the one $q_0$ has, but I'm not sure which ones, or why.)

A diagram for this Turing machine can be found on page 144 of the textbook.

This new single-tape Turing machine would behave as follows: we start at the left, and scan to the right until we see all 3 heads. Then, we carry out the transitions of the original multi-tape machine, updating marked characters accordingly. This is apparently enough to simulate the original machine.

Note that this wouldn't work on an infinite-tape machine, since then we'd have an infinite number of computations at each step (which is not allowed).

Also note that the first character for each tape is $\vdash$. The one after the string ends if $\sqcup$, and it's $\sqcup$ forever after that.

Any kind of computation with a finite2 amount of information per time step is no more powerful than a Turing machine.

1.3Some comments on Turing machines¶

1.3.1Infinity and beyond: Turing machine edition¶

The number of Turing machines is countably infinite.

The number of languages is uncountably infinite.

Thus, there are languages that cannot be recognised by Turing machines. In fact, there are infinitely many of them.

Recall that when reading a word, a TM can either accept, reject, or continue without halting. What if we were to add non-determinism to the mix? So that if any path in the tree leads to an accept state, we accept?

To simulate a TM using a pushdown automaton with two stacks, we use one stack for the left side of the tape, and another stack for the right side.