Any planar drawing $G$ has a corresponding a dual (also planar), which we'll call $H$.

To find the dual: draw the vertices for $H$ in the faces of $G$, and connect them if there's an edge between the faces.

Also, colouring a map is equivalent to colouring the dual of the graph.

We claim that if $G$ is 3-connected and planar then it has a unique dual. On the other hand, if a graph is not 3-connected, it may have 2 or more dual graphs, depending on the way we draw the original graph. 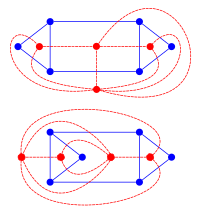 We can be certain that these are two different graphs (and not just the same graph drawn in a slightly different way) by looking at the distribution of degrees.

Proof left as an exercise.

We say $H$ is a minor of $G$ if it can be obtained from $G$ by applying a sequence of the following operations:

If $H$ is a minor of $G$ we write $H \preccurlyeq G$. The minor property is transitive.

Suppose we're given a particular graph $H$ and we're trying to see if we can find it as as minor in $G$. The way to do this is to look for trees in $G$ that correspond to the vertices of $H$, and then just contract the trees. Note that they have to be trees, and not cycles; contracting cycles doesn't give you anything you couldn't get by contracting a tree.

Here's why minors are useful:

Proof: By Euler's formula, if $G$ contains a $K_{3,3}$ or $K_5$ subgraph, then it is clearly not planar. Similarly, if they're contained as minors, then $G$ can't be planar either - for example, if $K_5$ is present as a minor, then $G$ has 5 trees, all of which are completely connected. (It seems obvious from this that $G$ is therefore not planar, but I'm not sure how to formalise that.)

Suppose, instead, that $G$ has neither a $K_5$ minor nor a $K_{3,3}$ minor. How can we show that $G$ is planar? (Note: this is probably one of the hardest theorems in the course.) We can prove this as follows: suppose the theorem is false. In that case, there must be at least one counterexample. Consider the smallest counterexample $G$ (so the smallest graph $G$ which has neither a $K_5$ nor a $K_{3,3}$ as a minor and yet is not planar). This will be a proof by contradiction, making use of the fact that any smaller graph is not a counterexample.

Now let's add back $e$ to $G'$, which will give us a graph that is equivalent to the original $G$. We'll now show that the resulting graph $G$ is planar.

First, we show that $G$ is 4-connected. To do so, take any planar drawing of $G'$. Look at the face $F$ containing the contracted supernode $(u, v)$. I don't really understand the rest of this proof, so fuck it.

Remains an open problem. For $k=5$, this implies the four colour theorem, which is kind of neat.