The simplest kind of telecommunication network is a crossbar switch. This is essentially a complete bipartite graph (aka a bipartite clique), with $N$ input ports, $N$ output ports, and each input port connected to each output port.

Clearly, this sort of switch can route any permutation (encoding a set of input/output port pairings). On the minus side, this sort of switch is quite expensive to build as you need $N^2$ connections. Furthermore, there is a large number of crossovers1; this is also expensive and can even decrease performance.

A Clos network is a network that incorporates many small crossbar switches, encoded in 3 stages. Example: 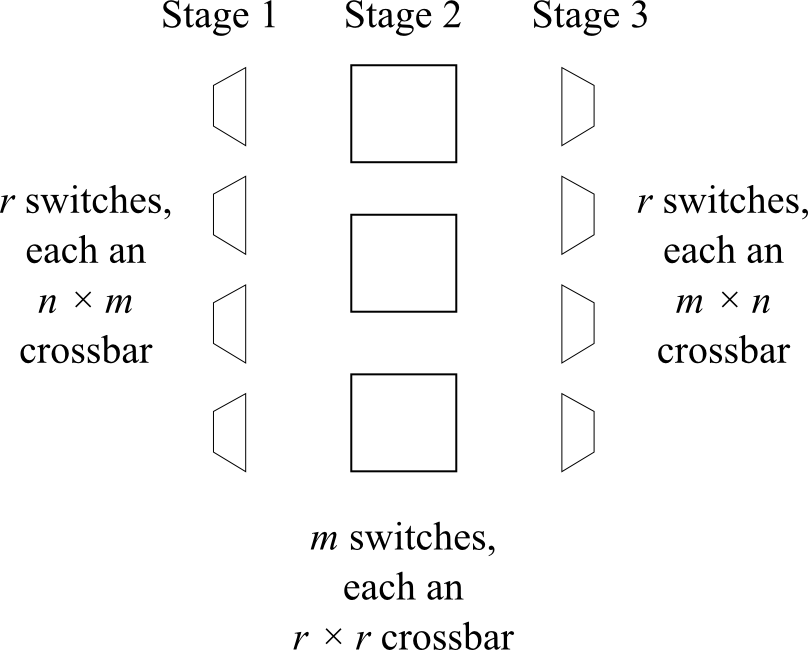 Let $r \times n = N$. We will use this new connection scheme to improve on the $N\times N$ crossbar switch scheme we saw earlier.

We must decide on a path for a packet immediately when that pair arrives. For example, when we receive the pair $(9, 7)$, we must find a path from 9 to 7. All the paths that we choose must be vertex-disjoint, to prevent blockage.

The resulting graph $G$ is $n$-regular. We showed earlier that we can apply Hall's theorem to regular bipartite graphs. So $G$ decomposes into $n$ perfect matchings. We can use one of the middle crossbars for each perfect matching, which gives us a valid routing, as desired.

We saw that dividing a crossbar switch into 3 layers reduces the number of edges and crossovers. What if we were to divide each layer into sublayers? If we keep iterating until we get $2\times 2$ crossbars, then the result is a Benes network. I assume this will be covered next class.