The pumping lemma for CFLs

1The pumping lemma for CFLs¶

So where do we find the structure needed to prove the pumping lemma? In the grammar, of course. We learned earlier that any CFL can be described by a grammar in Chomsky normal form. We'll use this fact in our proof of the pumping lemma.

Assume that $L$ has a context-free grammar $G$ in Chomsky normal form, where $G$ contains $n$ non-terminals (where $n$ is finite).

Recall that in CNF, our rules are all of the form $A \to BC$ and $A \to a$ (or $S \to \epsilon$). Consider a string of length $2^{n+1}$. By the form of the rules in CNF, we know that the branching in the tree for generating this string is at most binary. So the smallest tree you can build to represent such a tree has a height of $n+1$.

Here's another way to think about this: going down the tree, you must have hit at least $n+1$ non-terminals on the way. Since there are only $n$ distinct non-terminals in this grammar, then, by the pigeonhole principle, at least two occurrences along the path must be using the same non-terminal, which we'll call $X$. 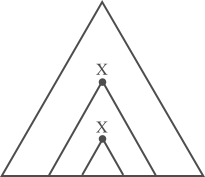 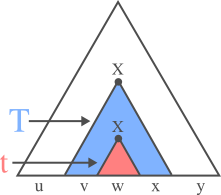 This shows us where we have the opportunity to pump. In a context-free language, we could just replace $t$ by $T$ or vice versa (pumping up vs. pumping down). So then you would have either $uvxy$ or $uvvwxxy$, and in the latter case you could keep pumping indefinitely, resulting in $uv^iwx^iy$ for some integer $i$.

This is the essence of the proof for the pumping lemma. We won't formalise it.

1.3Formal statement of the pumping lemma¶

We see intuitively that a pushdown automaton with only one stack is incapable of recognising this language. To prove it, we can use the pumping lemma. We can use the same sort of game formulation that we used with regular languages:

(There are in fact many other ways of choosing the cases - the solution presented above is merely one of many possibilities.)

This one is trickier since the language is so unconstrained. Instead of using the same approach that we used for the last question, we'll make the following fact: if $L$ is context-free and $R$ is regular, then $L \cap R$ is context-free. We define a language $L' = L \cap \{a^*b^*a^*b^*\} = \{a^nb^ma^nb^m\}$. Since $L'$ is the intersection of $L$ with a regular language, we can use the pumping lemma on $L'$ (which is more structured and thus easier to pump), as proving that $L'$ is not context-free suffices to prove that $L$ is not context-free.

Now we break up the string $s$ into two equal blocks (halves). As before, we analyse the different possibilities for $v$ and $x$:

Left as an exercise for the reader.

There is no CFL over a one-letter alphabet that is not regular. The proof is left as an exercise for the reader.

2.2Designing a CFL from its complement¶ 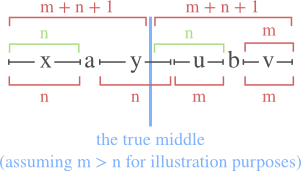 So the two halves of the resulting string differ - one half has an $a$ at some position where the other half has a $b$. Similar reasoning holds for words generated by the $S \to BA$ rule.